Heaven Is A Place On Earth

This is the end of a really traumatic day but all's well that ends well.

Those of you that follow this blog will know that we have four girls long overdue to birth and we have been on tenterhooks for weeks.  Every time any of them go to the poo pile we have been really disappointed, thinking this is it and then they just poo.  This morning Si kissed me goodbye because he had to go to the office, he said that maybe Sanctimonious could birth today because she was kushed away from the rest of the herd.  I was standing at the French windows with my coffee watching them when I suddenly realised that Aurora was facing away from me but I could see white, she is a brown fancy with a white chest.  There was a head presented but she had sat down.  I waited and waited and nothing seemed to be happening but I text Si to let him know.  I went across to give everybody their breakfast and Aurora got up and ran over, there was no way she was missing a meal.  She stood eating and the head was no further out but I could see the feet and thought with the next push the sac would burst and things would start to happen.  Once she had finished she just went and sat down again.  Another 20 minutes passed and still nothing so I thought I had better go and intervene but she wouldn't let me anywhere near her.  I went and stood in the barn so that I could watch her but she couldn't see me and still nothing happened and I was really starting to panic.  Si then telephoned because I hadn't text him to let him know what we had had and I had to tell him that absolutely nothing was happening and I may have to phone the vet and suddenly Aurora gave a big push and the baby shot out.  I hung up on Si and went across, the cria was really weak but I had the birth pack with me and I towelled her dry and sprayed her navel.  The placenta was born straight away so I checked that over and realised that the baby had stopped breathing.

I am so grateful to my alpaca facebook friends from around the world as without all their discussions I wouldn't have known what to do next.  I stayed really calm and massaged her heart at the same time as giving mouth to nose resuscitation and she suddenly shook slightly and started to breath.  I really wanted to phone the vet or Wellground Alpaca Stud for help but didn't have any hands free to call them. Aurora had just walked off showing complete disinterest in her, Aurora's last baby had died with the previous owner and apparently Aurora hadn't been keen on feeding her.  I got a coat on the baby and carried her into the chase thinking that Aurora would follow but she had just gone back to the herd. 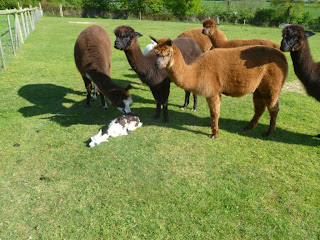 Just before she had stopped breathing
I managed to coax Aurora in with the feed bucket and Bubbles also followed.  The baby was making no attempt to stand after an hour but I did notice that Bubbles was sitting next to her and I thought that might have been putting Aurora off so I then had to get Bubbles back into the paddock at the same time as keeping Aurora with her baby.  I made the area they had smaller and smaller so that Aurora was forced to stay near her baby and I noticed that she then started to hum and kiss her and sniff at her so that was an improvement but the baby still couldn't stand.  I lifted her twice and she stood still the first time for about 2 minutes and then fell down and made no attempt to stand on her own so I did it again and she fell straight away.  I gave her kick start and she got a little livelier but still seemed weak.  Time was getting on by this time and I was about to get the colostrum as almost four hours had passed since she was born and I knew I had a limited time to get it into her.  I decided to have one last attempt and made the pen area even smaller so that Aurora couldn't move far and I held the baby to her.  It worked.  I checked the babies mouth and there it was........milk.  As it had got warmer I took her coat off so that she could dry properly in the sun and absorb some of the rays from the afternoon sun. 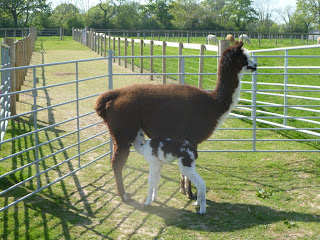 The pair of them really got the hang of this feeding game.  She was up and down all afternoon feeding.  Aurora has finally learned how to be patient. 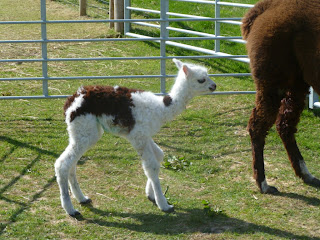 They have bonded so well.  When we lifted the baby at 5pm to feed her we were covered in spit and I have never felt so happy to be covered in the smelly green stuff.  Aurora is now really protective. 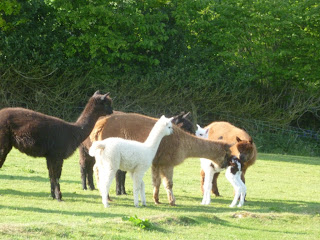 We let them back in the paddock this evening and all the aunties came over.  Well, everybody loves that new baby smell.  Eleanor was really happy because the new baby has been running around with her now.  While I was trying to coax her to feed and to stand I kept telling her how heavenly she was so that is her name.  Heaven.

When Si walked into the paddock to see her she ran straight over to him and stood next to his legs.  It's not fair.  If she is going to bond with a human it should be me, I did all the hard work.

So my facebook buddies you helped save a life today and can I introduce you all to Ashdale Heaven.
Posted by Unknown at 01:17

Email ThisBlogThis!Share to TwitterShare to FacebookShare to Pinterest
Labels: Heaven