Is there really a drought going on our there?  Are we the only ones having rain every day?  Who makes the decision about droughts?  Do they ever go outdoors, or at least look out of their window?

Yesterday we were feeling really fed up with the weather and the fact that Wellground Jemima was obviously fooling us again.  It was gas and she was just fat so she was moved out of the birthing paddock to make way for the next due girls.  We did have more chicks hatching so that was fun but we couldn't get the mower out to cut down the weeds as the grass was just too wet.  The pekin pen is overrun with nettles so we keep losing the hens in the middle of it.

In the afternoon Si was tidying the barn as the forecast is no better for the rest of the week and we have the shearer booked for Thursday so room has to be made to take the whole herd in on Wednesday to keep them dry.  I was very brave and decided that the paddock cleaning still had to be done so was walking up the chase towards the top when I saw a really clean alpaca.  It took a while for it to sink in that we didn't have one that small and I shouted Si.  He came running out of the barn thinking something terrible had happened and I just pointed.  Jemima had given birth on day 370.  The only thing Jemima does in a rush is get to the feeders.  She is a great mum and dotes on all the cria that are born.  Si went back down to collect a towel, teramycin and, of course, the camera. 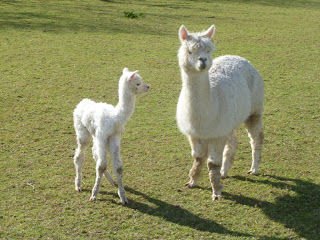 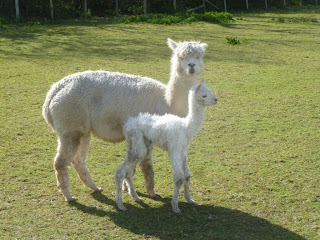 Not great photos, I admit but we were delighted with this new little girl.  We haven't decided on a name yet but she wouldn't have been here at all if it hadn't been for all the advice I had from friends in US and Australia.  We hadn't been able to get Jemima pregnant so she was flushed out, given antibiotics and mated on two consecutive days as well as being given Receptal.

We decided that we had to get them back down to the birthing paddock and when Si tried to pick up the cria poor Jemima thought he was kidnapping her baby and started to scream while chasing him all the way.  She's not falling for that again and hasn't left her baby alone all day, we haven't even been able to weigh her but as she is quite lively and seems to be feeding well we are going to leave well alone for now.  It is lovely having a baby in the paddock right outside our window, especially as she is from our own bred herdsire, Ashdale Cooper.

Roll Out The Red Carpet

Saturday is disinfectant day.  We normally start the day with paddock cleaning then sanitise all the feeders and drinkers before moving onto the chicken houses.  We were expecting a World Champion Alpaca Breeder to visit us tomorrow bringing a special delivery but whilst still on the paddock cleaning the telephone rang.  It was to check if it was ok to bring the visit forward a day.  We weren't really dressed for visitors but were excited all the same.

If I say it was so that nobody missed the Grand Prix tomorrow morning then those in the know will be able to identify the visitor straight away.

A couple of hours later Alpaca Royalty arrived, our new Elite Australian Herdsire, Eringa Park Lionheart ET.  I will tell you all more about him on the next blog.  To prove just how regal he is he had the aforementioned World Champion Alpaca Breeder employed as a chauffeur for his journey.  Most of us know him as Rob from Wellground Alpaca Stud, he had to come alone as Les does all the important jobs on their farm and had to stay behind.  We hadn't even had time to put the red carpet out or hang the bunting.

It was so funny getting Lionheart up to his new paddock.  He had to walk right up the chase past our girls.  He really strutted his stuff as the girls ran to the fence to stare at him, they were dancing and jumping with excitement.  I think Rob managed to get a video of it.

Lionheart settled in for a few hours and we decided to try him on one of our girls later this afternoon.  Here he is with Ashdale Delilah.  This mating should produce a cria with amazing genetics as Delilah's dam is Hemiccoyo Cricket of Cambridge which includes genetics from Hemmingway, Ruffo and and Fibre's Brutus and her sire is EP Cambridge Samson (a Supreme Champion himself) and includes more top Australian genetics from his sire EP Cambridge Peruvian Spartacus.  Samson has sired more Supreme Champions himself and, in fact, sired one of our herdsires, Ashdale Cooper.

While we had a World Champion Breeder here we weren't going to miss the chance to show off the fleeces of our home bred girls.  Rob was impressed with them so it has been well worth investing in the Elite Australian Genetics and we are definitely going to carry on the same route.  These animals hold their value and are producing the finest fibre, which we are proud to display and sell at agricultural shows which generates even more interest in the alpaca industry. 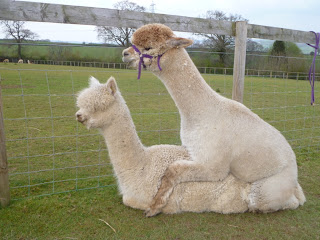 Delilah is a maiden but Lionheart is so experienced that he jsut pushed her to the ground and got to work... 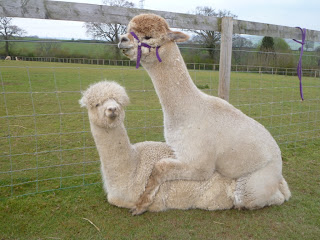 ...and half an hour later Delilah is looking decidedly bored with the whole procedure but Lionheart looks as though he is having a good time.

All the while this was going on we also had a hatch of pekins and silkies taking place so we had been running back and forth to the incubator checking on progress.  As I type this we have 20 out of their shells and are waiting on another 3 or 4 that are pipping.  I hope they don't take much longer as the race starts in a few hours and it would be nice to be able to fit in a few hours sleep before then.  If I manage to stay awake tomorrow evening I will try to get more pics of Lionheart and introduce him more fully.

Being Just As Busy As A Bee Can Be

Once again it has been a long time since the last blog but we haven't been sitting back doing nothing.  A few weeks ago we attended The Game Fair which was a two day event and almost sold out of our knitwear so the needles and yarn are out every night trying to build up stock for the next show we are to attend in a few weeks time.

Si had a trip 'Oop North' over the weekend delivering two of our young boys.  This sale had been on the cards for quite a long time and they have gone to live on a farm with other animals but they have actually been purchased by a knitting club.  One of the members attended one of the shows where we had a stall last year and we spent quite a while talking about the alpaca yarn and she bought quite a large quantity of it to take home.  A few more trips down here to see the farm and meet the animals and she was hooked.  Si forgot to take the camera so no shots of their new home. Her closing words when she came back down to purchase the boys where 'We'll just take a couple of boys ..........for now'.  I think she already realised that she was going to get hooked on keeping alpacas.

We have bought Eringa Park Lionheart ET an Elite Herdsire from Wellground Alpaca Stud. I am so excited about this purchase as it means we can now offer our clients a choice of two absolutely fantastic studs which gives them another reason to purchase female alpacas from us.  I hope we can live up to having Alpaca Royalty living amongst us.﻿ 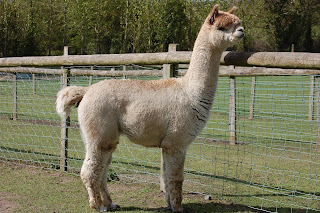 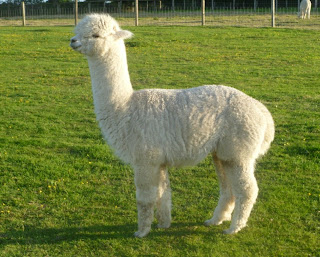 Although Cooper only has one cria on the ground, born last year, it has an absolutely fantastic fleece and on the strength of this he has 6 outside matings booked already so he is going to be a very happy boy over the next couple of months.

Even more amazing news, and congratulations are due to Wellground Alpaca Stud, most of you will be aware that the World Alpaca Conference is taking place at the moment.  Les and Rob Rawlins decided to enter two fleeces from their Elite Herd and took two prizes.  Brown Champion for Wellground Lalique and 1st Senior White for their homebred Herdsire Wellground Close Encounter.  This now makes them World Champions.  We are particularly pleased for them as we have a daughter of Close Encounter, our very own Ashdale Exhibition, and her fleece shows excellent promise so we may well have to enter her fleece in a few shows this year.

Although the blog has been quiet we have been buzzing with excitement about the future and are making plans to take our business forward and help others to do the same.﻿
Posted by Unknown at 00:17 2 comments: