Save All Your Kisses For Me

We had an exciting day yesterday.  I was watching Neema out of the window for any change in her behaviour as she was due to birth the other day even though her stomach looked really small.  I could see her back end bulging and it looked as though she was straining, although she didn't attempt to go to the poo pile.   She had been straining for about 20 minutes and it was completely unproductive so I telephoned Head Office (Wellground Alpaca Stud) to ask Rob and Les how long I should wait before I phoned the vet.  I suddenly realised that the screeching noise I could hear was her and not the pigs as I first thought.  They advised I did it straight away and while she was still on her way a nose appeared, and then slightly more of the head.  I really wished we lived closer to a vet as the wait seemed interminable with Neema letting out more screams.  I had no choice but to delve into the birthing kit get out the lube and the long glove.  Head pushed back in and, cupping the toes, I got the feet out.  I phoned Les again while I was leaving Neema to do a bit of the work herself, even Les heard her scream as she pushed out the body.  It would probably have helped if she had been willing to stand but she just stayed on the ground pushing and screeching.

I had just picked up the phone again to cancel the vet, after checking and drying off the cria, when she turned up and laughingly accused me of spoiling her fun.  She does love alpacas and ended up just watching him for a while.  We thought Neema might have rejected him after all the trauma but she has turned out to be an absolutely super mum. 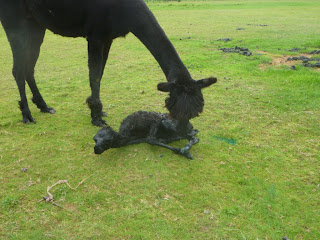 A couple of minutes after being born and, no, I hadn't done the paddock cleaning that morning. 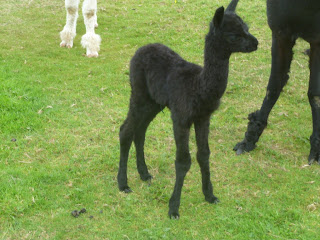 Here he is a couple of hours after being born. 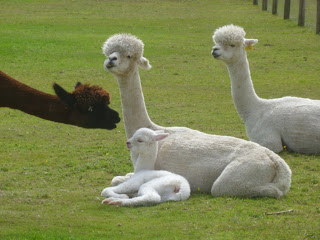 While I worked up a sweat 3 generations of top Australian Genetic casually watched.  Halo had so much hay in her mouth that she looks as though she has an abscess.  Our clients baby boy sprawled next to his mum wondering what all the fuss was about.

As soon as Si gets back from the office he changes out of his suit and gets out with the animals.  He loves having females queueing up to greet him with kisses when he gets home, all he gets from me is a list of jobs that need doing. 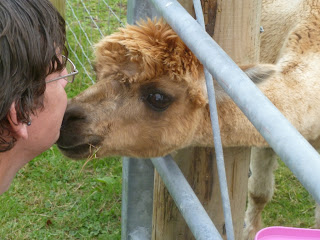 Chance is always the first in line
﻿ 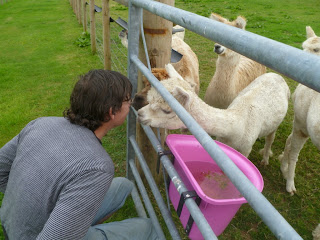 Exhibition next with Bonnie waiting her turn in the background
﻿ 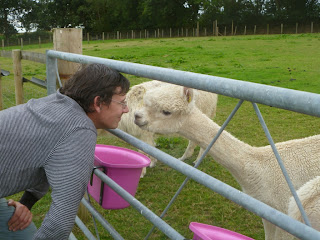 It would appear that East Devon Planning Dept. are appreciating that alpacas are proving to be a sustainable business and have granted two farms permanent planning permission to build their dream homes on their own land within the past month.﻿  People are loving living with these gentle animals.  The top quality fleeces are still being sold in premium products despite there being a recession on.  We can hardly keep up with demand for our knitwear at the moment which is why it doesn't make it to the shop on our website.

We haven't come up with a name for the new baby yet and are really struggling to come up with something with a music connection.
Posted by Unknown at 23:37 1 comment:

Sorry, I know that we should blog more often but it has really been a hectic time.  Our clients have had another baby born here, they are going to start with their hands full as both of their new baby boys are really energetic bundles of joy.  I still feel like a proud parent whenever we have babies charging round, so much so that I was trying to have a serious conversation on the telephone today but instead gave them a report on what the new cria was doing.  Aaah he's chasing a bird now, aaah now he's trying to play with Temple.  Not doing much for my credibility as a business woman.

Let's see.  What have we been up to over the past couple of weeks?  We managed a visit to Rosemary and her men over at Westhill Alpacas.  More plans were made over what shades we were aiming for to add to our knitwear collection.  Aforementioned knitwear collection was seriously depleted at the last two shows we did and we are now starting to panic about what we are going to have left to sell by Christmas and if the mills can spin and get more yarn back to us in time.  We both have lots of ideas about new items to add to our stock.

Si has been deciding which girls can go up for sale but has said that people can come and choose which ones they are interested in and what bloodlines they want in their herd so he has been preparing me for letting some of my girls to leave home.  I know it's not as though I'll never see them again, we offer a free mating with Cooper or one of our other stud males and we always make sure that we visit clients to help them with injections and toenail trimming.  We also get regular updates when they telephone us for advice; we are available to our clients 24/7 by telephone. 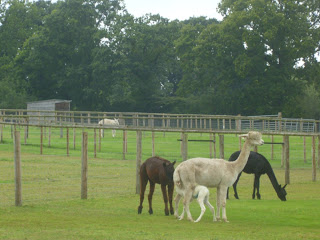 This is one of the only photos I managed to get of the latest addition to our clients' herd.  He's never still.  I hope they have all their farm preparation done before they get their alpacas as they will spend so much time just watching their babies.

These are some of my new babies.  I think this is consolation for having to let some of my alpacas go.  I know that is the general idea of raising alpacas but I want to keep them all and then on the other hand I want others to share the happiness and calm they bring to us. 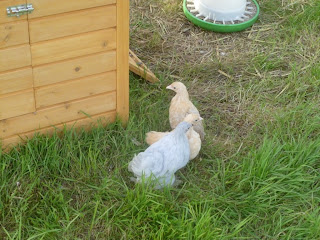 I can cuddle these at the moment and we have had children staying on the campsite.  They were a joy to have here and were so interested in the animals.  They were brilliant at picking up the chicks and cuddling them.  So much better than me, I am missing them and hope they return again to see us. 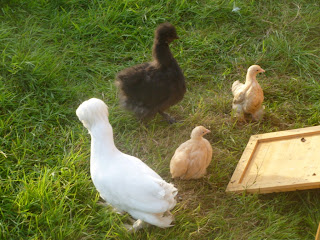 I have had to take a break from knitting as it is rubbish collection day and as all the recycling has to be washed I was washing a tin when I sliced between my little finger and ring finger.  It hurts and I need sympathy.  It has stopped me from knitting for the night.
Posted by Unknown at 23:13 1 comment:

When you look up in the sky at night and think that you are looking at stars, you aren't. What you are actually seeing are sparks from my knitting needles.  We did another small show last weekend and despite the really hot weather people were buying scarves and hats and we have also taken quite a few orders to be completed by the end of the month.﻿  We have even been taking advantage of modern technology and managed to get electronic payments made to us while we are in a field in the middle of nowhere.  Si referred to knitting and crochet as 'playing' the other night and the glare I shot in his direction told him that he was lucky he wasn't wearing the knitting needles.

We have moved Halo and Neema down into the birthing paddock under the window so that we can watch them closely now they are nearing their due date.  They are both due on the same day but I doubt that will actually happen. 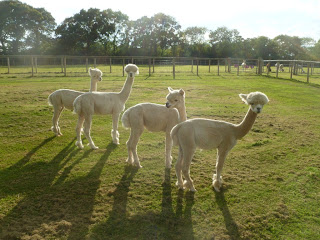 Last years girls were all lined up so as soon as I pointed the camera in their direction Carrie decided to look behind her which made Penny (at the front) look like a 'pushme pullyou' from Dr Dolittle.  We really need to plan a mating for Delilah soon in the hope of a birth next year. 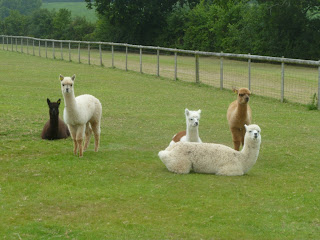