Stuck In The Middle

No photographs today as it has been a real struggle getting around.  It has rained so much the past few days that the ground is really sticky and I have felt as though I have been walking through jelly today.  The heavens opened this morning and didn't stop raining down all day so only the necessary chores got done, the paddock cleaning was neglected but the barn got a good cleaning and fresh straw put down.

I am thinking that the Australian girls have taken offence at something I've said to them.  I mentioned on Sunday that when Si is here they don't seem to drink as much water but on the days he is absent they develop a terrible thirst and I have to keep topping up the drinkers.  I'm sure they must be getting enough from the grass at the moment and they have been eating slightly less hay hence there is no reason for them to be this thirsty, so it must be a conspiracy.

Great news on Rob's blog about the yarn and products from the alpaca fibre.  News like that just encourages us to work those knitting needles faster.

Si took over the computer earlier and has put our wethers up for sale on alpaca seller.  Tomorrow we have a visit from our vet to scan what, I hope, are the pregnant females just for confirmation and then we have to choose which of the girls we can bear to part with.  The answer to that is actually none, but I know I have to be sensible.
Posted by Unknown at 23:21 2 comments:

I couldn't think of a song title but the above should be sung to the theme of 'The Archers'.  That's what I always sing in my head when Si talks football to me but tonight he has been going on about the quality of my photography.  Apparently, I have taken the shot of him and Carl working on the barn in Digital Zoom when I should really have used Optical Zoom and then he started going on and on about pixels.  I have only just stopped putting the camera up to my eye to take photos and to top that he has just informed me that 'The Archers' theme tune is called 'Barwick Green'. (Dum de dum de dum de dum).  The only excuse I can make for him is that he is an accountant. 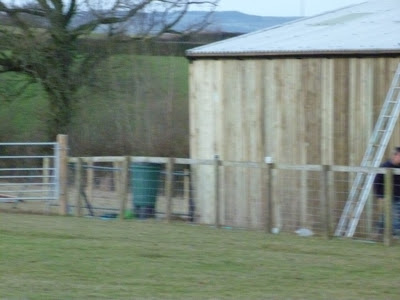 I took a photo yesterday of the quality of Exhibitions fleece but that wasn't good enough to put on and then I took a shot of a dock growing to prove that the grass and weeds have been taking full advantage of the warm temperatures.  I couldn't believe it, the grass growing again already, it really does make me feel as though it is spring.  Carl confirmed that Rosemary had been saying the same thing over on Ibberton Hill.  That should help us cut back on hay a little and I may risk reseeding the areas where the grass has died on previously used alpaca poo piles.

Anyway, this morning Carl arrived to help Si clad the barn.  After a bit of messing round breaking drill bits, recharging drill batteries, fixing the generator and although it wasn't mentioned there was probably a fair bit of cursing going on they started to clad the barn.  The wood was wet through so was really heavy and they had to move it two pieces at a time from where it had been dropped off by the delivery man.  I was impressed by how fast they actually got the cladding on after fixing the beams to the frame.  I did point out to them towards the end of the day that they should have sorted the Yorkshire Boards into shade order and then fixed them.  Carl did ask if I wanted them taken off so that they could start again but I thought I would let them off with that as I am sure they will look fine once they have been stained.

Yesterday we administered Lambivac and Panacur as a preventative measure to all the girls and cria as they were dry for the first time for weeks.  The ground was still sodden and we squelched our way around to clean the paddocks.  We had one girl that had been really stroppy since we got her and she refused to come to the feeders and I was worried that she wasn't getting supplementary feed but the bad weather really helped.  As she couldn't graze while there was snow on the ground and the hay racks were empty of a morning she would come over looking for food and I managed to get her to eat some alfalfa (this has been referred to on my facebook page by a breeder in US as crack for alpacas) she loved it, I gradually reduced the amount of alfalfa so that she was only eating camelibra and she is now first to the feeder when she sees either of us.  I talked softly to her while I was feeding her and this seems to have built up trust.  When we wanted to do a fecal test on her last year it took three of us to hold her down.  Our poor vet was thrown to the ground, I was knocked into a fence and Si jumped out of the way.  Yesterday she stood perfectly still while I held and talked to her and Si administered the injection and drench.  We were astounded, but it just goes to show that you only have to build trust with alpacas.
Posted by Unknown at 00:06 1 comment:

Thank You Very Much

Rosie still hasn't given birth.  BAS sent us an email last year regarding mating service certificates, I'm really hoping that they implement this idea as it would help us to keep an accurate track of due dates.  According to our records she is now on day 446 so it will be another call to the vet for a scan on Tuesday.  It looks as though she still has a really lively cria in there but it would be good to check again.  It's getting so stressful watching her constantly to make sure that she isn't uncomfortable and never leaving the premises in case she goes into labour.  These beautiful, gentle animals do have the ability to drive you to distraction sometimes.  The weather today has really matched my mood.  Misty and wet.  I have been saved by long telephone calls to Rosemary at Westhill Alpacas and Rob and Les at Head Office (Wellground Alpaca Stud).  They have listened to my ramblings for hours today and after chatting to them I felt a lot more positive so my thanks go to all of them.  It's so good to know that we have made friends down here even though they are still too far away to pop over and share a glass of wine with.  We are now making plans for future matings as Rosemary has recently acquired a beautiful black Witness boy for future sire duties and with Rob and Les I was planning repeat matings as we are so pleased with the quality of this years cria from Close Encounter, Lionheart and Samson with the added bonus they were all girls.

We have been planning which animals to put up for sale, I know we have to, so we will be putting some up for sale over the weekend.  We just have to decide who.  We bought fantastic Australian bloodlines to start with and carried on with using top quality stud males.  I will hate to let any of them go, but go they must.

We couldn't take any photos today but the alpacas certainly don't look their best, I don't know why they still feel the need to roll in the mud when they are so wet already.
Posted by Unknown at 22:34 4 comments:

The Race Is On

We have been working around the rain the past few days trying to get all the jobs done that were made impossible by the snow.  We moved the females on to new pasture and they were so happy when they saw where they were going that they raced right past me.

Before they were moved we gave the cria some oral medication and they went straight to their mum's for a feed, it must have been to take the nasty taste away. 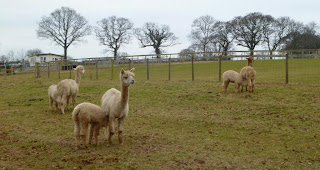 I managed to get a photograph of Ashdale Exhibition to show Rob at Wellground.  She is out of Cambridge Larralluh and her sire is Wellground Close Encounter.  We are so pleased with this cria and have raved about her on the telephone to Head Office but Rob hasn't managed to see her yet.  She seemed quite happy to pose for me, under all that dirt is an amazing white lustre. 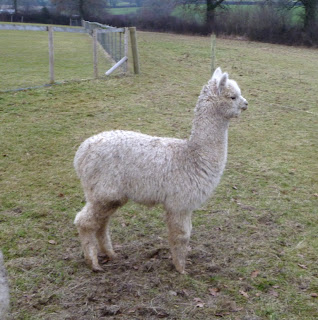 Rosemary told me I could crochet and I really can now.  I have made a cloche hat, it's brilliant how fast crochet is and if you drop a stitch it doesn't travel down.  I just need Rosemary to tell me that I can win the lottery and I know I will.  Everybody needs a Rosemary in their lives.
Posted by Unknown at 22:13 2 comments: