We haven't blogged because it gets a bit repetitive reporting that we've been watering the animals to keep them cool and poo picking.  We have been outside until late evening and have been too tired to even speak to each other when we get in.  It has been so long since we have had any rain that all the water butts are empty and we have had to haul the water from the house.  The alpacas have been drinking it faster than we can fill their containers.
We did manage to visit Rosemary and Carl over at Westhill Alpacas a couple of weeks ago and that was fun, we compared knitting and Rosemary gave me a list (I love lists) so I have slowly been working through that when I have the time.  They came to visit yesterday so we actually had a relaxing few hours chatting and planning.
Finally, today we can announce we have a cria.  We have been getting jealous reading about everybody else's crias but finally we have had our second birth.  Cricket (one of our star girls with Ruffo and Hemingway in her background) gave birth to a female cria with the most amazing blood line.  Her sire is Samson and we don't know what Rob and Les at Wellground have been putting in the water this year but he does seem to be throwing females after a run on males last year. No name has been decided for definite yet but given her sire it may be Delilah. She may be light fawn or it could just be that she was quick to the dust bath after her first couple of feeds. She was also bang on her due date at 335 days, if only they were all that reliable. 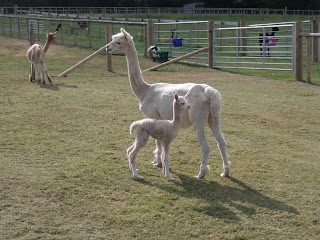 I know, I know. It's been a while since we blogged.

We've been rushed off our feet recently. We played host to the Westhill boys for the rest of the shearing last weekend and I have to say they have done a cracking job, especially considering they are relatively new to it. The blankets that are to go to the GWR fleece show in September hav been bagged up carefully ready to take to Wellground. We are hoping to go in person but we have checked and we have two births due that day and three the week before. At the same time we have taken some samples for analysis, this is to help us with our breeding program.

We have been spending the long days and nights tackling the docks and buttercups with a combination of Grazon 90 and the ride-on mower. Some nights only finishing when the light completely goes at around 10pm. However we seem to have particularly sneaky buttercups that are chosing to stay just half an inch tall to avoid the chop.

All the alpacas seem well and the pregnant females are growing nicely.  Cricket is the first due to birth at the end of the month and we actually watched her cria moving this evening, it looked as if it was rolling over the way her stomach moved.  We are still having no luck with Cooper, he probably isn't ready yet but we keep introducing him to Mimi and they just take one look at each other then carry on grazing.  How many meals out together are this pair going to have before they get down to business?

The vegetable beds are also coming on a treat, we just need to remember what we've planted, I suppose we'll find out in a few months.
Posted by Unknown at 23:57 5 comments: