Oh, What A Day

I could do without these shorter days, it doesn't even work getting up earlier because you have to wait for it to get light enough to do the outside chores.  We have had a couple of days of gales, you know the type ........and they called the wind b*!!*?%s, anything but Maria really.  Nothing like Jayne and Debbie have had but we're obviously not as tough down here.  It's back to normal today with only a light shower and quite pleasant to be outside if you can disregard the mud.  It is cold enough for the grass to have stopped growing but we have a huge store of hay in the barn so all the alpacas are quite happy.  Must admit to being a bit late putting the fresh hay out yesterday because we are very muddy so it is taking a long time to walk around.  Feet keep sticking in the mud or having to walk really slowly to stop myself from falling over.  Poor Wilhelmina gave me a fright, I though she had a graze down her face but it turned out to be mud on her nose that had dried.  She doesn't look happy at me turning up late with supper. 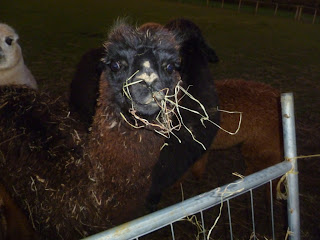 We've had a lovely day, we had visitors who are thinking about starting an alpaca business and they turned up to see our farm.  Obviously the first thing that happens when visitors arrive is that the ketle goes on for coffee, we were allowed a little time to talk but the temptation was too much for the children and they wanted to get down and dirty with the animals.  They had come well prepared with well scrubbed wellington boots.  We took full advantage of their children, their son topped up the hay while their daughter fed them alpaca nuts.  Jemima and Chance were obviously the first to come forward to be fed by hand. 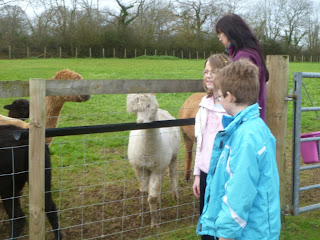 The wife was really taken by the knitwear as she is a knitter herself and was particularly interested in pursuing that side of the business.  We then brought one of this years cria out to show what to look for in a fleece and I must admit even we were taken by the crimp and density.  When we identified him we realised that he wasn't even ours.  He belongs to a client and was the first cria from our own home-bred stud male, Ashdale Cooper.  We are consoling ourselves with the fact that we have sold a fantastic male so that should make our clients really happy and that should be the aim of any business.  With the genetics in him we shouldn't really have been surprised.  Coopers father is EP Cambridge Samson, who resides at Wellground Alpaca Stud, and was Supreme Champion at one of the largest alpaca shows in the UK.  We are so glad we used him as we have more of our girls pregnant by Cooper and we now know that we are going to produce some fantastic cria this year.  The investment in great stud animals has really begun to show.

We came back in and Si started to go through the fleece statistics that we had got back from the States last month and obviously the kettle went back on.  I thought that the hens were being a bit restless but we couldn't figure out why.  Si then suddenly spotted a fox and ran out.  The fox ran along the hedge, he had bitten one hen, bantams had flown up onto the barn roof.  Once Si came in I noticed that the alpacas in the bottom paddock had all congregated at the fence so off he went out again.  Mr Fox was back but that was soon remedied by putting two of the younger boys down there to stand guard.  We could see everytime the fox came close as the alpacas stopped eating and stared at him as though to say 'Come on then if you think you're 'ard enough'.  The alpacas won and the fox hasn't been seen again, hens are back happily roaming around the paddocks with their own fluffy security.

The best news is that our visitors today bought a hat for the daughter and the son got yarn so that he can learn to knit and make his own so if they do decide to opt for a change of lifestyle we will have a new young knitter in our midst.
Posted by Unknown at 23:00 No comments:

We have only just sat down to relax and I have just remembered that I should do another blog because I promised somebody this morning I would put a picture of our pigs on.  We put out clean straw right across their pen in readiness for the snaps but then more important things cropped up.

We have had a visit from a photographer who wanted pictures of a selection of our chickens for a book.  When we checked out the author later on Amazon it turns out he has written quite a few books about chicken care and they look so good that we have ordered a couple ourselves.  Once the photographer had seen the alpacas he was completely enamoured with their gentle faces so his camera came out again.  I was so jealous when he showed me the pictures he had taken, they were very much superior to anything I could have taken and he seemed to have taken hundreds of shots in less than an hour.  I think we will be having another visit from him. 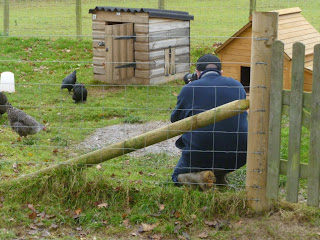 We then had a few people arriving to buy chickens so by the time we got back to the pigs they had buried the straw and look as though they had been having a great time.  I think there was a small patch of their clean dry straw carpet left in the far corner but they will probably deal with that tomorrow morning before we spread more out.  Don't know if these qualify for Rob's muddiest animal contest because I think that only applies to alpacas. 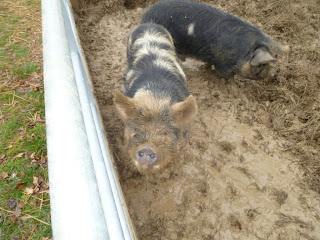 Talking of contests, Rosemary has set a challenge to alpaca bloggers to decorate their field shelters so that is something else to plan.

The weather doesn't seem to know what to do at the moment.  One minute the sun is shining and we are out working in tee shirts, the next minute the rain seems to be flying across the paddocks sideways.

The postman arrived with the Vitamin A,D and E that we had ordered.  We like to give all the alpacas a dose monthly from September to March and although they are not due their next injections for another 10 days we had started to worry as we only had enough left in the medicine cupboard to do 2-3 of them.  We also had a delivery from Mole Valley with another lorry load of timber for Si to build another chicken shed.  We have some girls ready to go outside and some week olds to move into the larger brooder.

It is getting so busy around here but also getting to be a lot more fun which I have been particularly glad about today as it is my dad's birthday, 1st one since he died,  so my sister and I have been consoling each other by text, facebook and phone today. That's another 1st over and done with.
Posted by Unknown at 23:56 1 comment: