Welcome to My World

We had a busy day planned as DD was travelling down from Liverpool.  This is always an adventure as it usually involves quite a few train changes with at least one missed connection but there was an added bonus today with a two and a half hour bus ride slotted into the middle as the trains were cancelled for routine construction work.  Thank goodness for mobile phones.
While Si and I were otherwise engaged Eleanor noticed that the feeders were being neglected by the other girls but had camelibra left in.  This is the first time we have noticed her eating hard feed. 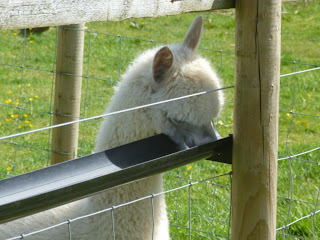 This is what was keeping us occupied.  Kylie finally decided to give birth today, she was so chilled about it she stayed sitting down.  I told Si to get the feed bucket to get her to stand up to make things easier.  I know my girls and giving birth isn't going to stop them having their breakfast.  She stood up walked over to the feeders, had something to eat and then went back to her chosen position and sat down again.  The poor cria practically walked out. 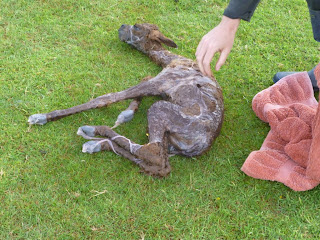 He has been lively from the word 'Go'.  As soon as Si had rubbed him dry he got into a kush and Heaven and Eleanor came over and introduced themselves.  We have named him Condor as he is a dark brown colour.  Whenever he moved Heaven and Eleanor jumped back with fright.  Really funny to watch and kept us amused for quite a while. 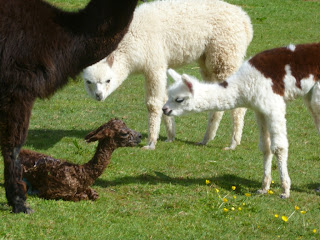 Here he is drying out and bonding with mum, Kylie 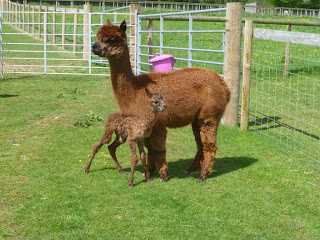 It looks as though Eleanor is asking him if he wants to play this evening.  It didn't take him long to join in the evening race with the two girls. 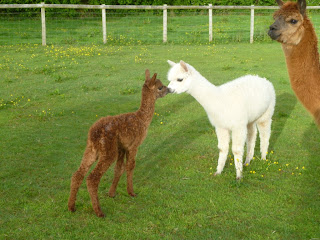 I must thank everybody for their kind emails, comments, messages and cards.  It's amazing how much they help.  My sister has been fantastic, arranging everything and consulting me over the phone, we have laughed a lot too  but we both have sore faces where the salt in our tears have burnt our skin.  Obviously with still having two overdue girls on 383 days now we can't leave the farm and make the journey to Liverpool, we are seriously doubting the mating dates now.  Important arrangements have had to be delayed making things more upsetting and believe me, it is taking so much restraint not to name and shame.  Dad's final party is not for another two weeks (I can't really say the usual word) so we should definitely have the other two cria on the ground by then.
Posted by Unknown at 23:49

Email ThisBlogThis!Share to TwitterShare to FacebookShare to Pinterest
Labels: Condor